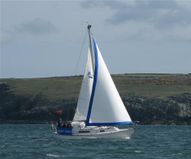 This boat became the Princess 32 after Marine Projects evolved into Princess Yachts in 1971. However it benefits from a thicker hull than the Princess and unlike the later Princess models is able to take the ground on its twin keels. The original engines have been replaced with a pair of Volvo Penta MD 21b's each producing up to 75 HP and both are in excellent running order, with the starboard side engine recently having had a new heat exchanger fitted and the port side engine having had a new cylinder head gasket fitted and head skimmed in 2018.

She has two 125 litre fuel tanks and is very economical on fuel compared to other boats I have owned. One of the stern drives was comprehensively refurbished in 2016 and both are serviced annually with new bellows and anodes fitted in April 2019. The boat was also anti fouled in April 2019 with two coats of Cruiser 250 on top of a base coat of Primocon.

With her low air draft this boat has taken us under the low bridges on the Worcestershire Avon and the Kennet and Avon canal, not to mention chalking up many sea miles in the Bristol Channel, where her weight and hull design provide good stability in a lumpy sea.

She has a 75 litre calorifer to provide hot water and a shower in the heads, and space to accomodate a family of five, with room for two more in the cockpit berth. A 12v fridge keeps your drinks cold whilst the 700w inverter allows you to use the many 240v sockets when not hooked up to shore power, so this boat is ideal for extended cruising on the inland waterways as well as port hopping.

Looking in to double berth in bow